In many cases, infidelity is never discovered and a happy marriage is no guarantee that a spouse will be faithful. Happily married people sometimes cheat due to a desire for newness. 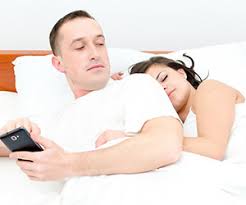 Cues of infidelity vary widely from relationship to relationship however, the warnings signs are there. Are they hiding their cell phone screens when they text? Leaving the room to take a call? Clothing smells of cigarette smoke, musky or another person’s sweat? Sudden changes in their work schedules? Not interested in having sex yet is newly obsessed with the upkeep of their looks? Ladies, suspicion tends to help cheaters cheat more effectively. voice your doubts. After the confrontation, it will only make it more difficult to discover the truth. They will hide their second phones or buy hidden phone apps. They will pay more attention to their work schedule in order not to get caught. Do not confront them unless you are satisfied with the proof you already have. It’s a common mistake.

How to catch a cheating husband

In order to catch a husband suspected of an ongoing relationship you must be strategic. Most men do not have the discipline to have a one time one off affair. This is someone they know and have a relationship with, someone they trust. It isn't often that husbands will have an affair with escorts unless they aren't being watched or cared for at home. Step number one. You must pay attention to your husbands schedule. Typically people are creatures of habit so if you see that he is suddenly "going to the gym" on Thursday evenings after work. I would pay attention to that specific moment. When he comes home is it consistent with a gym work out? Or does he smell of alcohol and cigarettes? Maybe his schedule suddenly has him working Saturday mornings. Yet you dive by the office and don't see his car. He's not picking up your phone calls. Pay attention to the coming & going of his schedule, this will tell you a lot. When you notice an irregularity do not confront him. This will only make things harder! Call us and will perform surveillance. It is the best way to get indisputable proof of the affair.

An affair is discovered now what?

10 Things You Must Know About Infidelity and Cheating. “A good marriage therapist or a marriage education class can help lead the way. But be certain to seek help that is marriage-friendly.” The perfect example of a couple surviving an affair. We were hired by the wife of a famous business owner. She was able to gather that he was leaving work early and not coming home until late. She hired us to see what he was doing during the 4-5 hours that were unaccounted for. We were able to follow her husband to a Motel 6 where he met with a blonde female escort. After approximately an hour the two exited the Motel room. They left within five minutes of each other to try to conceal the fact they were together in the same room. After getting the same results on a second surveillance the wife was able to set up an intervention with him. He confessed to the affair and began sex therapy. The couple has managed to get over his sex obsession and now their business is now more successful as ever. Hey, we get it. Often times you aren’t sure what to say or what you’ll do. However, you do know the situation is distracting you from work and or living a healthy happy life. Let us help you get back to your life and help you focus on you. Once we start surveillance you will be glad your doing something about it. On a good note, if your wrong about the affair no one is the wiser. On a bad note, we find they had gone astray. Either way, it will help you face facts and make an informed decision. We understand how personal this is and that it’s your life. Let’s take the next step together. Hire Paramount Investigative Services today.